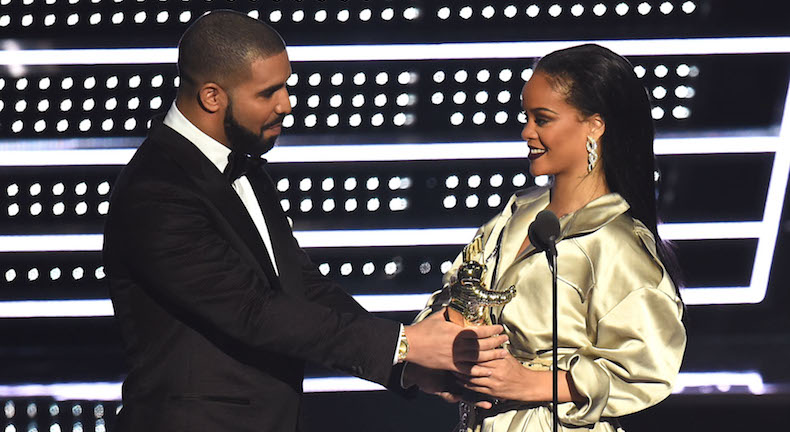 The MTV VMA’s may have dropped in ratings this year, but your girl had this show on DVR repeat the entire week (I think I watched Drake and Rih and Bey like 5x over)!  Drake honored Rihanna with the coveted “Michael Jackson Video Vanguard Award,” preparing a speech that will go down in VMA history, as he professed being ‘in love with her since he was 22-years old.’ As he walked up the steps like a nervous school boy, I knew in my gut that something was about to go down.

ICYMI (but you probably didn’t) or if you want to watch it again.  This forthcoming power couple is about to move into Bey and Jay territory. Watch out now.

But hold up — we can’t forget about Beyoncé who took center stage and blew us all away with that remarkable performance called PERFECTION.  Seriously? Is she for real? It was as if we had tickets to her tour.  Watching it on TV was a concert-like experience.  Clearly, if Queen Bey asks for cinematography straight out of a feature film or HBO mini-movie trailer, then Queen Bey gets it.  There is no question that she is the greatest performer of our time. BOW DOWN! You can’t watch the footage anywhere online, so here is a reaction video from the audience that you probably didn’t see!

And lastly, thank you to Kanye West for the inspiration that is Teyana Taylor. I’ve been hitting the gym every day since watching this video.  My favorite cycling instructor at Equinox Weho (Joseph Seeman) plays this song in every class and has us visualize Teyana’s body, while yelling at us to work harder as we have NO EXCUSES! Seriously.  Who needs summer when this fall body is in motion. Love this jam — Fade on repeat.