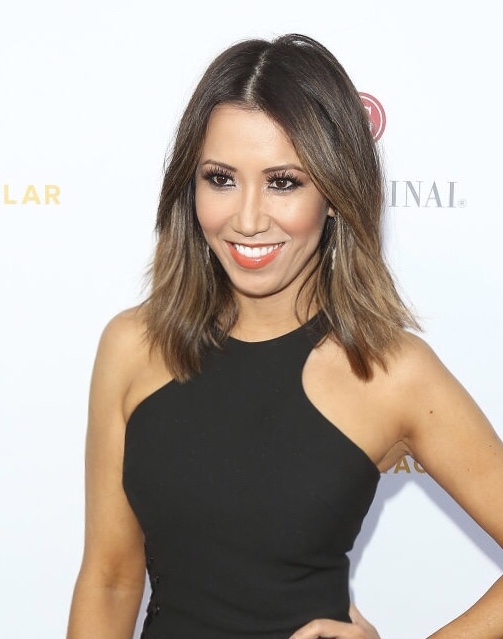 In recent years, Michelle has expanded into long-form storytelling and has proven ability to cross over into the news and documentary genre. She was tapped as an investigative journalist and host of a one hour, verité documentary special for MTV in 2019. Over the course of several months, the docu-special followed Michelle, as she took a deep dive to uncover a notorious grift that rocked the world of pop culture. Kicking off 2022, Michelle was a featured sports & entertainment host on nationally syndicated show, Daily Mail TV  to discuss Super Bowl LVI and the celebrations surrounding Los Angeles. Over the past several years, Michelle has freelanced as an entertainment reporter and host for Getty Entertainment Video. A mental health advocate, Michelle is currently hosting and producing a series of interviews, in partnership with Providence Health System, focusing on our collective mental health as we make our way through this Pandemic. 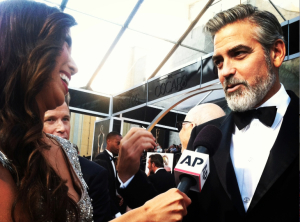 A staple on the red carpet throughout her career, Michelle was regularly tapped as an official, live red carpet pre-show host for the biggest awards shows in the industry including: The ESPYs Countdown Show, American Music Awards, and Billboard Music Awards.  She was also named global anchor for Associated Press Live (AP Live) on the Red Carpet for The Oscars and Grammy Awards for multiple award seasons. Michelle was ABC’s backstage digital host for Dick Clark’s New Year’s Rockin’ Eve with Ryan Seacrest, where she interviewed performers as they prepared for the show.  She also co-hosted The Billboard Music Awards Backstage Live Stream, providing behind-the-scenes interviews, commentary and social interaction as a second-screen experience during the three-hour ABC broadcast.

Having developed a personal rapport with a variety of talent and their publicity teams throughout the course of her career, Michelle has interviewed some of the biggest entertainers and athletes in the world, including George Clooney, Lady Gaga, LeBron James, Justin Bieber, Ben Affleck, Rihanna, Aaron Rogers, Taylor Swift, Peyton Manning, Jon Hamm, Miley Cyrus, Carmelo Anthony, Celine Dion, and more.

Michelle possesses the natural skill to lead and facilitate candid conversations and makes others feel at ease, allowing her subjects to genuinely engage and share from their heart.  Always seeking to reveal stories that show a relatable, human side to the idolized and glorified, Michelle thrives as a passionate storyteller.  Making the most of her skills in front and behind the camera, Michelle has landed exclusive interviews for various outlets and continues to maintain a foundation of trust within the industry. 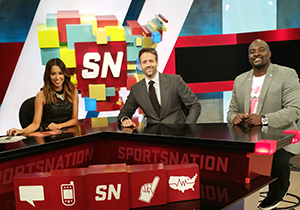 Michelle joined ESPN in late 2013 as host of the “Guinness Suite,”  a studio interview series featuring athletes and celebrities.  Guests sat down with Michelle in a custom studio out of ESPN LA, and her weekly segments aired on SportsCenter, ABC, and ESPN.com.  Her conversations focused on personal stories of overcoming adversity, sports and pop culture news, along with fun and engaging game segments.

Soon thereafter, Michelle became a recurring guest host on sports and pop culture show, SportsNation. Her duties included moderating panel discussions between Max Kellerman and Marcellus Wiley, leading segments, and conducting guest interviews before a live, studio audience. She gained valuable experience in this role throughout the spring and summer of 2015. 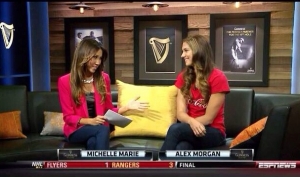 During her time at ESPN, Michelle joined Hannah Storm, Michelle Beadle, Jalen Rose, Bill Simmons, and Cari Champion as a co-host of the “ESPYs Countdown Show,”  She was stationed at the “360 Fashion Stage” alongside NBA Star and style king, Nick “Swaggy P” Young.  Together, they provided fashion commentary, handed out ESPYs hardware and interviewed athlete and celebrity guests. 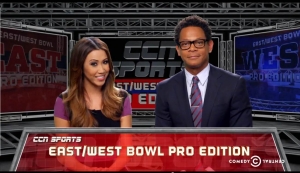 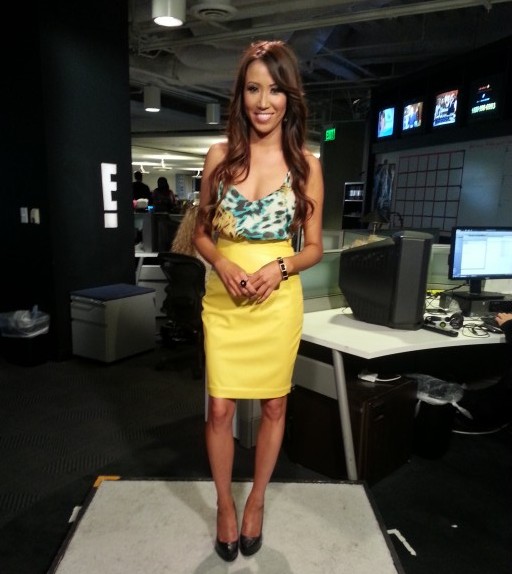 As an entertainment news anchor and correspondent, Michelle has covered every major red carpet tentpole event, along with exclusive set visits, festivals, tv/film premieres, photoshoots, junkets, and more.  Over the past few years, Michelle has worked as a freelance entertainment reporter and host for Getty Entertainment, where her red carpet and entertainment coverage is distributed to broadcast and digital platforms across the world.

Previously, Michelle was announced by The Associated Press as the sole anchor of “AP Live” – a global, live red carpet pre-show, covering multiple award seasons.  From AP’s prime platform at The Oscars and Grammy Awards, Michelle led coverage of their two-and-a-half hour live show, watched by millions across the world. She has appeared as a pop culture/lifestyle expert on nationally syndicated talk shows, ‘The Real,’ ‘Daily Mail TV,’ and ‘Maury.’ 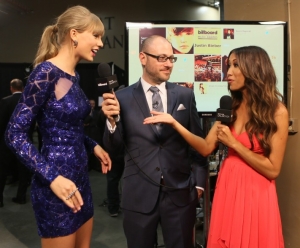 From 2011–2013, Michelle was a recurring in-studio host at E! News for their daily, digital news show,“E! News Now”. delivering the latest, breaking entertainment news stories.  Over the course of three years, Michelle gained valuable experience by honing her teleprompter and voiceover tracking skills on a consistent basis.

In 2012-2013, Michelle was also an anchor for “The Daily Buzz” – a live, entertainment news and talk show for Buzzmedia. From their Hollywood studio, Michelle led/moderated live commentary between editorial panelists, experts and interviewed daily guests.  She was also their red carpet correspondent at the VMAs, Golden Globes, People’s Choice Awards, and the livestream host at various film premieres for the “Twilight” franchise. 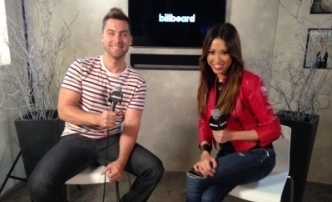 As one of the first correspondents to conduct some of the first interviews with Lady Gaga, Taylor Swift and Justin Bieber, Michelle has cultivated a foundation of trust among artists and music label executives over the past decade-plus. She’s interviewed an impressive list of musicians across multiple genres, and has held on-air talent roles for music industry’s beloved publications: Billboard & Rolling Stone.

From 2014-2016, Michelle was a host/correspondent for Rolling Stone, where she conducted one-on-one interviews with musicians and entertainers. She was the host and producer of “Rolling Stone Live,”  during Bonnaroo Music Festival and the Sundance Film Festival.  While at Sundance, she booked and conduced one of the final on-camera interviews with rock legend, Scott Weiland, just months before his tragic passing.  Michelle also sat down with The Weeknd for an exclusive one-on-one at Rolling Stone Live’s Grammys event. 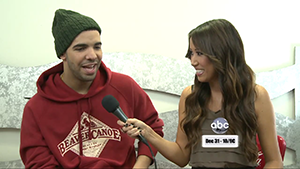 In 2013, Michelle was tapped by Billboard as the official, pre-show and backstage host for The Billboard Music Awards.  As their anchor staged at the top of the carpet, Michelle interviewed the year’s biggest chart-toppers during the two-hour live stream. Directly after the carpet, she reported to her backstage duties joining Billboard’s editorial director, Bill Werde, to co-host The Billboard Music Awards Backstage Live Stream,  She also worked as a Billboard’s correspondent for their annual Grammy after-party and hosted “Billboard at Park City Live,” interviewing talent in their ‘Sonos’ pop-up lounge during Sundance in 2014. 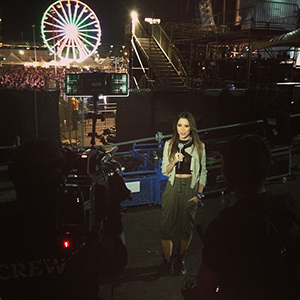 Michelle is also no stranger to the music festival circuit.  She most recently created and hosted content around the festival for Rock the Vote at Coachella, discussing the upcoming election and importance of youth voting with artists and attendees.  Michelle also hosted the Life is Beautiful Festival documentary, covered Budweiser’s Made in America during their inaugural year in Philly, and served as the official, livestream host for Rock the Bells Music Festival. 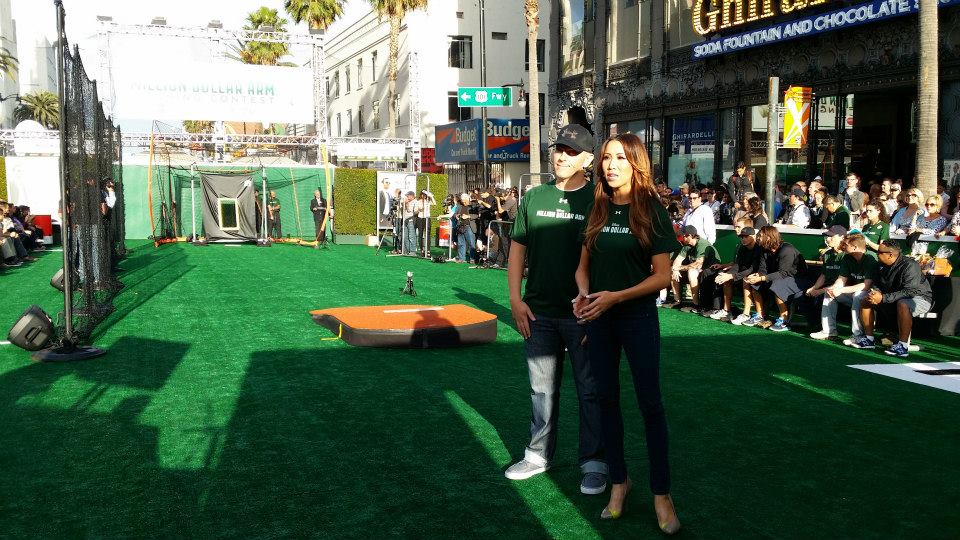 Specializing in the intersection of sports and pop culture, Michelle recently joined a panel of female sports broadcasters for Diageo’s “Women in Sports Media” panel in New York, where they discussed the barriers women face in sports media. In 2015, YPO (Young President’s Organization) tapped Michelle to conduct a live, in-depth conversation with the first openly gay NBA athlete, Jason Collins during their private event. She also co-hosted Disney’s ‘Million Dollar Arm Pitching Competition, a live event that took over Hollywood Boulevard to kick off the film’s world premiere. Nike tapped Michelle as their official live host and emcee during NBA All-Star Weekend in Los Angeles for the “Los Fearless Tournament” alongside Big Tigger and Terrence J.  Soon thereafter, Michelle was Nike’s host/emcee for “Fight Night at the Montalban,” their official viewing party for Manny Pacquiao vs. Sugar Shane Moseley. 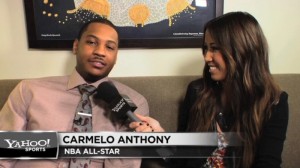 From 2011-2013, Michelle was a recurring host for  “Yahoo Sports Minute” – the #1 online sports show on Yahoo!.  Previously, Michelle made headlines as a contributing host/reporter for Yahoo! Sports, where she secured an exclusive, sit-down with Carmelo Anthony moments before his trade to the NY Knicks. She also contributed to Y! Sports’ Super Bowl XLV coverage in Dallas, earlier that year.

Michelle developed her own unique way of covering sports — rooted in fun and focusing on the players personalities and lifestyles.  The combination of an entertainment-style conversation with newsworthy sports topics soon became a winning solution for Yahoo! Sports, as Michelle’s work generated millions of daily clicks. She was face of the their lifestyle channel in partnership with Young Hollywood.  Developing her niche at the intersection of sports and entertainment, Michelle spent three years covering various events including Super Bowl, NBA All-Star Weekend, The Rose Bowl, ESPYs, X-Games, and more. 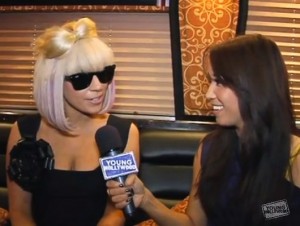 Michelle’s cut her teeth as a full-time host/producer at entertainment media company, Young Hollywood. During their start-up phase from 2007-2010, Michelle gained tremendous experience coming in at the ground level to help launch their brand.  This rare opportunity allowed Michelle to develop multiple skillsets as their main on-air talent/host, producer and talent booker.  During her tenure, Michelle cultivated vital industry relationships across all aspects of entertainment and sports. She built brand awareness by pitching YH to major labels and PR teams, where she then began to secure access to major events and behind the scenes access – music videos, in the studio, tv set visits, backstage, along with exclusive one-on-one interview opportunities from the comfort of the celebrity’s home or favorite destination. Her passions for music and sports helped her launch and lead coverage for both verticals. Michelle was able to help Young Hollywood grow into a major media brand, as she helped develop and create YH’s profile-style, evergreen segments — a format in which the brand is known for.  Generating millions of views on regular basis, she also worked with weekly distribution partners including Yahoo! Sports, Yahoo! TV, People, and TV Guide.  Michelle co-developed, produced and hosted YH’s first branded video campaign for AT&T “Verge to Emerge” series, and tentpole integrations for vitaminwater (Sundance) and Ray Ban (Coachella). She also co-developed, produced and hosted YH’s long-form shows, “Backstage Pass” and “Beyond the Athlete”on HULU.

Kickstarting her career, Michelle landed her first TV hosting job as co-host of “Street Tuner Challenge” on FOX’s SPEED Channel. Previously, she traveled across the country as a host/live emcee for various corporate clients including: Yamaha, VOLVO, Suzuki, Infinity, Tecmo and Sharp. 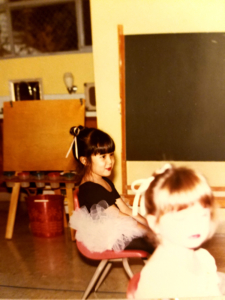 Michelle holds a Bachelor’s Degree in Communications (PR), studied Broadcast Journalism at UCLA Extension, and is a Southern California native.

Born for the spotlight, Michelle began training as a dancer and musician as early as 5-years-old. Michelle’s passion for music and performance began to develop through daily practice and weekly performances.  Eventually shifting all of her focus to dance, Michelle began to excel as a competitive dancer in the jazz, hip-hop, and lyrical categories. 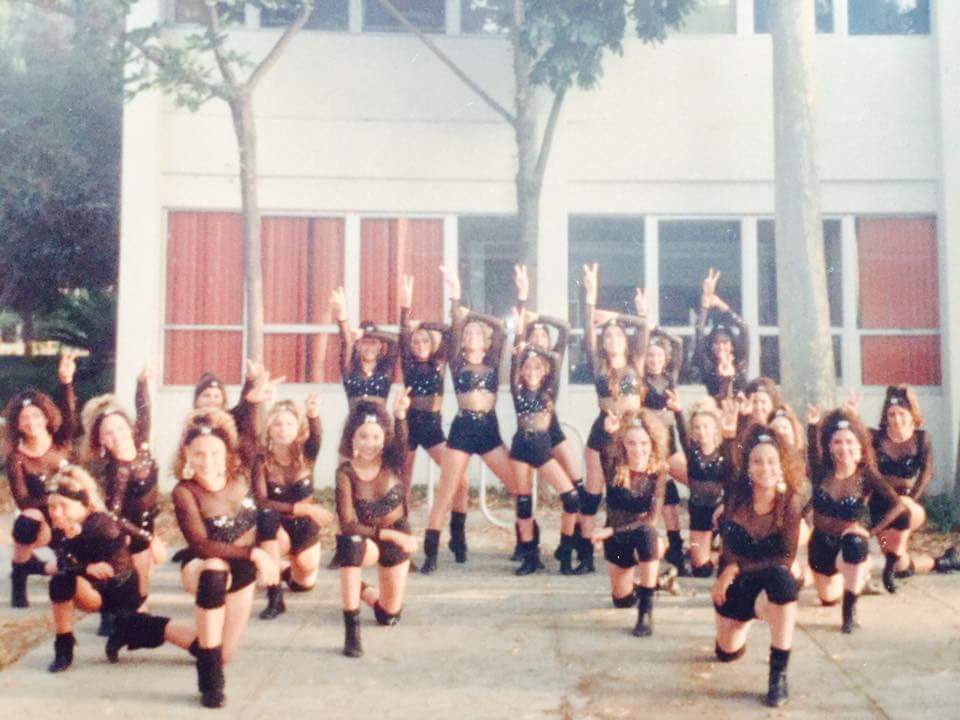 As Michelle’s leadership skills began to evolve, her competitive drive became undeniable. After winning numerous awards at national dance competitions as member and co-captain of California Dance Academy’s “TnT Dance Team,” Michelle was scouted by a dance agent at 16-years-old.  She gained experience working on commercials, live shows and music videos for artists like 50 Cent and Beyonce.  Over the years, Michelle was groomed to become a performer and which helped her seamlessly transition these skills into a television hosting career.  Whether she’s speaking on TV, at a live event, or performing her choreographed dance routine in a packed-arena, Michelle truly thrives when she’s live.

Michelle’s strong work ethic, diverse appeal, and love for storytelling is undeniable. Her down-to-earth personality and decision to stay true to herself throughout her career has become a key component to her success.  Always pushing herself to new levels with tenacity and sheer determination, Michelle’s broadcasting career goals are limitless. 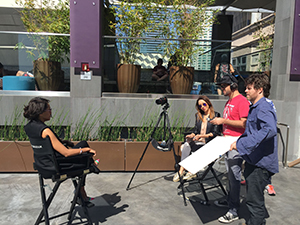